*brace yourself, a lot of philosophy in this one.

In the spring of 2008, I was 21-years-old, 378lbs, and finishing my final year of film school…it was then that I discovered what would become my favorite band of all time. Allow me to introduce you to Dragon Ash.

When you discover a new band…the first song you hear, or the first music video you see is critical. I remember. I was sitting in my bed, watching Youtube music videos just before I put on my headphones to daydream of performing in my fictional world…and I came across “Fantasista”.

Haha! You know a song is good when it completely throws you off track, the kind of song that changes your plans as soon as you hear it. Allow me to explain…

If you’ve been reading my memoir up to this point, then you know I use music as a medium, a tool to escape, to feel something else detached from the reality I’m currently entrenched in. I need it to move me, to motivate me, to make me feel something, anything.

I don’t do drugs, smoke weed, or get drunk. Hahaha! I don’t need to. My imagination and an innate mental ability to remove myself from this world on command is good enough. But still…At the age of 21, that “innate ability” was still relatively weak. Music was more like the ignition switch by which the portal of imagination could be open. And once the portal was open, I’d step through and enter a whole nother world. And in this world…I was no longer “Reginald Tennie”. But something more. Something better.

As I said…I used to weigh 378lbs. But before it’d take me four years to drop down to 220lbs of solid steel and sex appeal, I dreamt of the kind of person I wanted to be. It was a fantasy that I’d eventually turn into reality. This is what it means to have a vision. You gotta have a great deal of confidence, motivation, and encouragement to push yourself to that finish line. And that finish line, is the vision you never lose sight of.

Big Bang and H.O.T was pure entertainment to me, the music that entered my soul and made me want to sing and dance and smile. Dir En Grey and American groups like Slipknot, System of a Down, and MachineHead fueled my drive, instilling in me a never-stay-down arrogance by which I refused to quit and give in. Music from Clazziquai, Samurai Champloo, Yoko Kanno and Epik High opened my eyes to stars and supernovas, allowing me to spread my wings and fly high as a writer.

Then there was Dragon Ash…who provided something new…perhaps the most important thing every young man needs while he’s in the midst of finding himself…Honestly, adjectives fail me. It isn’t just confidence. It isn’t just encouragement. The best way to describe it is with a sentiment:

“Yo, who gives a shit. Just do your best and whatever happens, happens.”

By the time I was 21, I knew what I wanted in life. I wanted to lose weight to the point that I looked like superhero. I wanted to marry the most beautiful woman I could find. And I wanted to be the greatest writer of my generation. I wanted to do something so significant that future students would have to take tests about me in class.

These all sound like lofty goals and I dare say, if most men at that age had the same goals…they wouldn’t speak them out loud, let alone actually coming to the conclusion that this was what they actually wanted. But I did. I honestly believe that it was during this time that I transitioned from Reginald Tennie to Rock Kitaro. From the caterpillar to the butterfly. Dragon Ash helped. 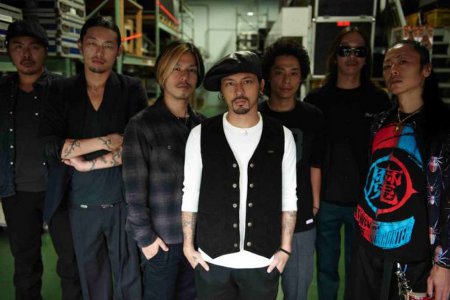 When you listen to music from groups like Dragon Ash…it really is a push for freedom. Freedom from what? Freedom from the lies and bullshit. In my final year of film school, I started to see the world for what it really was. Or rather, I had the courage to accept what I’ve always known deep down inside.

I smile as I write this. Because it sounds contradicting. Isn’t it? My goals aren’t in line with the freedom I talk about attaining. But therein lies the reality that I saw…we are all walking contradictions. We are all hypocrites. That’s alright. That’s okay. People will like or dislike you no matter what you do, no matter what you say. So your best bet is just to be yourself, accepting all your imperfections and insecurities. Cast off the chains of expectation. Be responsible, sure. Improve where you want. But no matter what, you have to be the one to dictate the terms of loyalty, respect, and honor and always, always be prepared to accept the consequences.

That last part is important. Because I see it these days. Too many of my peers accept their imperfections…but they go too far by demanding society should accept it as well. This, I don’t do. I am free. I believe everyone should be free. And this intuition appears to be right on the money, as I’d come to discover later in my twenties when I’d eventually read the Bible from cover to cover. Free-will is pivotal in everything we do. I dare say, most of the conflict and strife in this world stems from another’s attempt to crush the free-will of another, whether it’s physically, emotionally, or mentally. We are all free. Even the bad guys. They’re free to think and say what they want, at least in this country, they are.

Yes, it was around this time that I started to adapt the attitude of, “if you’re not with me, you’re not against me, but please step aside as I continue on my way.”

“Really, Rock? You gained all of this by simply listening to the music of Dragon Ash? YOU CAN’T EVEN UNDERSTAND THE LYRICS!”

Well, put yourself in my shoes. Young, impressionable, alone with lofty goals and nothing but an inexplicable sense of ambition. I had a rocky relationship with my family. I was refusing to pray or pick up the Bible. I was getting fed up with the one female in my life who’s shown me an ounce of care and affection. And I honestly thought I was an ugly monster when I was around others. You’re right. It really doesn’t make sense how listening to Dragon Ash’s music really just propelled me to another level.

I just know that when I listened to “Fantasista” that night…everything I’ve been feeling deep inside had surfaced to pick myself up and get over all the crap and bad cards life has dealt me. I think more than anything it reminded me of Asian Dub Foundations, “Fortress Europe” song and brought me back to when I first came to Tampa.

Back then, I was so eager, full of energy, optimism, a sense of adventure, ready to tackle anything and supremely confident in who I was and what I could do. Listening to “Fantasista” shook me free from trying so hard to be what others expected me to be. It reminded me of who I really am. If I had to choose a single word to describe me, it would be “rebellious.” I can’t be ruled. I can’t be contained by stereotypes. Even now…as a devoted Christian who believes in the Bible wholeheartedly, I am indeed rebelling against this world, the media and what our cultural leaders are trying so hard to steer everyone towards.

So what if I barely had any friends? So what if no one cares about me? So what if I am ugly and no one wants me? Who gives a shit! This is your life! Now what are you going to do with it? You just gonna sit there wallowing in pity over what you don’t have? Or will you pick your fat ass up and go! You’re only 21! The world has no fucking clue what you can do. NOW GET UP!

Dragon Ash is a rap rock group and they’re credited as one of the first to popularize hip hop in Japan. To be honest, before I heard of Dragon Ash, I had heard of other hip hop Japanese acts, but none of them sounded any good to me. Until Dragon Ash, the closest I’ve heard was Orange Range, but even with them, I wouldn’t classify them as “hip hop” the way we think of it in the states.

Formed by the lead singer, Kenji “KJ” Furuya, the drummer Makoto Sakurai, and the bassist Ikuzo Baba, Dragon Ash debuted in 1997 with the album, “Mustang.” However, it was their lead single “Grateful Days” from their third album that really brought them to prominence, in my opinion.

“Grateful Days” samples from Smashing Pumpkins, but I didn’t know that at the time I first heard it. “Fantasista” was the first song I heard from Dragon Ash, and “Grateful Days” was the second. I remember when I first saw the music video…my first thought was, huh…So this is where Mugan comes from. Haha! Because my anime fans can attest, I haven’t met many Japanese dudes that look like Mugan. But it really does give credence to the adage, “art imitates life”.

Also, the thing about Dragon Ash…is that it wasn’t just an escape, their album “Harvest” which contains the tracks “Fantasista,” it provided that dream-inducing ignition switch that I talk about in Chapter 14 when it comes to my inspiration to write. I think it may have just been the times I was immersed in, in 2008, where a lot of creative artists were blending smooth electronic in with their music. Big Bang did it. I mentioned Clazziquai and Epik High. And in Japan…there was Dragon Ash among others. The album, “Harvest” in particular had a number of tracks where there were hardly any lyrics. Just a smooth nostalgic soundtrack that made the hot sweltering Tampa nights, a cool refreshing breeze.

In listening to Dragon Ash, I was inspired to write a number of my best works in college. Hahaha! While everyone was struggling to come up with a single premise, I had a collection of them. So when an assignment came up, I had a number to choose from. Writing wasn’t/isn’t work for me. Even on my most exhausted nights where I’d do the closing shift as a delivery driver, then I’d go and work out from 1am-3am…I’d shower off, listen to Dragon Ash on the way to my school and station myself behind a computer.

Until the sun came up, I’d churn out page after page. I loved it. There was nothing more fulfilling for me than to leave the school on a Sunday morning around 8am… the parking lot, empty and wet, where I could see my reflection in the sun-shimmering puddles. I was alone. Didn’t have any friends. But you’d never think I was lonely just by looking. Even at that age (21), I scarcely ever had the awareness that I was by myself. I didn’t care. I was so happy to be able to write with the music of Dragon Ash, Samurai Champloo, and a little groove metal. Hahaha! It really is so weird. When most people think of the good college times, you’d expect to hear about the parties and concerts and events. For me…the best memories are the ones I literally created on a blank sheet of paper.