My Own Personal Kingdom 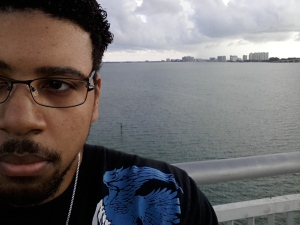 On July 3rd, 2005…I left the nest. It was a Tuesday morning. I packed up my belongings from my parent’s house in Augusta, Georgia and set off for Tampa to attend a film school. I didn’t know anyone in Tampa. I didn’t have any friends or family. It was a new beginning. The start of an adventure with nothing but a clear path in front of me.

The strange thing about me was that while my roommates made plans to get drunk at beach parties and head out to the dozens and dozens of strip clubs that the Tampa Bay area is famous for, something was drawing me to visit a library… to read more books. I wasn’t that big a reader back in high school. But the books I did read, made a big impact on my way of thinking. Also, it was my first quarter of school, and one of my first projects was to come up with a pitch for a twenty-minute short film for a screenwriting class.

Another thing that was so weird was that at the time, I was living in Palm Harbor. There were other libraries closer to me in travel time. But somehow I got it in my mind to visit the main branch in Clearwater. That’s a thirty-minute drive through rush hour traffic, but I managed to get there. It was the first place of significance that I went to in Tampa other than my school. I didn’t stay long because the library closed at 8pm, but that was all right. The three-hour visit felt like an eternity.

You see, this massive four-story library overlooked a scenic park with a pavilion center, regularly used for jazz events and festivals. But beyond the park, was a massive body of water, an extension of the Gulf of Mexico, and the bridge that leads over to Clearwater Beach, one of the top ten beaches on the East Coast.

I explored this beautiful and serene library floor-by-floor before ending up on the third floor. So high up in altitude with floor-to-ceiling glass windows, I was able to see everything. The sun was just setting on that hot summer day and the vision would be forever burned in my memory. There was just the proper amount of clouds to show relativity. As the sun set, the scene became a painter’s masterpiece with contrasting green-blue skies that transitioned to a thick blurry line of ascending yellow hues that became the darker red that surrounded the sun. It was magnificent. I was by myself. But in a sense…I wasn’t. It was always in breathtaking moments like those that I feel God’s spirits watching over me. But I digress.

For the next six months, I’d frequent this library…eventually moving from the library, onto the grassy field of coachman park that was adjacent to the library. And finally…to the bridge overpass that led to Clearwater beach. At the time, it wasn’t a popular spot. Most people would continue over the bridge to more scenic views of the gulf, but that didn’t matter to me.

I was perfectly at peace, dangling my legs over the water, watching schools of baby fish switch directions as if they couldn’t make up their mind where they wanted to go. For hours on end, I’d stare at the choppy surface and the foamy wakes provided by speeding boats. My mind would elevate me to the point where I could fly over the water. And I was always smiling. As if I was amused by a dog doing tricks. But other than the seagulls, and the occasional fish that jumped out of the water to catch a fly, I barely saw any marine wildlife. Even so, that was okay.

As the years went by, my personality went through that phase that I think many artists eventually go through at one point or another. That feeling of self-loathing, paranoia that everyone was against you, the twisted irony of self-awareness that nothing was going your way. From the age of 19 through 21, I barely visited the park. I think the only times I went was to show my brother or rare close friends the beautiful side of Tampa when they came to visit me. But other than that, I missed it. And I was miserable. 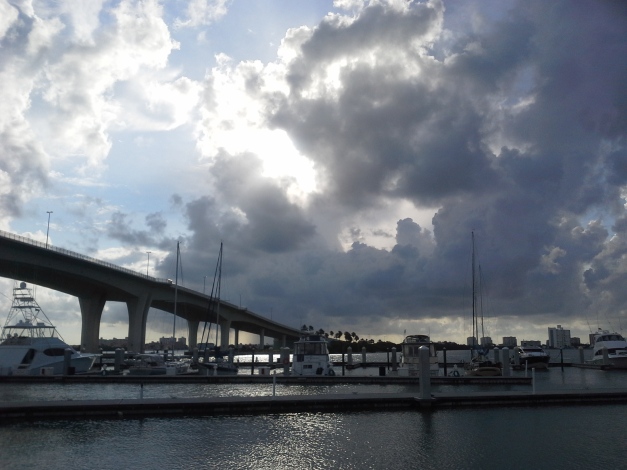 It wasn’t until I was 22, that I put aside time to visit the park of my own volition. It was the middle of this hot as day, I was well over 350 pounds at the time, so I was sweating my ass off while wearing large heavy clothes that concealed my body image (because I was so self-conscious). I went to the bridge because I was fed up with life. Not suicidal. Never suicidal. However I did entertain daydreams of how people would think of me when I do die. And I could definitely understand on an intellectual level as to why someone would have suicidal thoughts.

On this particular day, I brought my camera out with me to record myself ranting about the terrors of my internship in which my benefactors turned out to be con-artists. There was so much I had to say, so much I had to get off my chest. And when I let the last aggressive utterance rattle from my lips, when my fire in my lungs and the pressure in my forehead began to subside…I felt better, like I had finished this complicated dissertation with the whole world agreeing me.

I initially thought it was because I had filmed myself. But eventually, I’d acknowledge that it was because I was so honest with myself, about myself. I had learn that simply accepting myself for who I am, could take a massive weight off of my shoulders when it comes to my unsatiable need for acceptance that constantly contradicts my pleasure for distinction. This was what the Clearwater Bridge was to me. A reset button. Just as so many use tools like the Bible, going to church, yoga or family as nourishment to cleanse themselves. I use my spot by the water as a reset button to remind myself that this is my life…And I’ll do with it what I want.

As I grew older, aside from it being that reset button, I also use it as a source of inspiration. When I made up my mind to lose all of that weight, I used to walk across the bridge from one side to the other. In the middle, at the zenith of this bridge, there is an extension for pedestrians to walk out and overlook the bay. Being so high up…I swear that by looking directly at the horizon line, I can see that the earth is indeed round. I could see the point where the horizon made a subtle curve. So cool.

With a hard breeze blowing in my face, the wind rustling against my ears blocked out the sounds of passing motorists. I’d grin. As ambitious as I am, that bridge helps me realize something else. The world is large, so much bigger than Tampa. So much bigger than me. Despite whatever problems I’m going through, I know it isn’t the end. If I’m frustrated or depressed about something, that bridge helps me to snap out of it. In the grand scheme of things, whatever I’m depressed about is trivial compared to what I want to accomplish.

I recently wrote about how I sometimes feel like there are five of me when I look in the mirror. Well, when I’m up on that bridge by myself, my mind creates an illusion of four different versions of me. All four of them keep me company and encourage me to forget whatever’s keeping me down. They’re hard on me, telling me to man up and quit acting like a bitch. One of them even slaps me, telling me that I’ve been through so much more shit than what I’m going through now. And finally, another glares at me and tells me… “Don’t forget, dumbass. You’re Rock motherfucking Kitaro. Make shit happen. That’s what you do.”

Hahaha! I can’t tell you how many times I’ve walked down from that bridge feeling like I was just baptized in a river of electricity. I can’t stay still. Whatever problems I had beforehand feels like an afterthought. It’s amazing. This gift I have. I know it sounds weird. But I love it. I once felt ashamed for saying that I feel like I had five of me. But in the future, I’ll just tell my wife and loved ones that they should feel thankful. When my wife marries me, she won’t just have one man looking out for her, but five of me coveting her, protecting her and our children.

The place really is sacred to me. Being that I now live in Clearwater, the bridge is only fifteen minutes away from me. The best time to see it is right after or before a storm when the clouds are moving in or rolling away. Once, I really did even see dolphins and it felt like I was watching rock stars in the water! 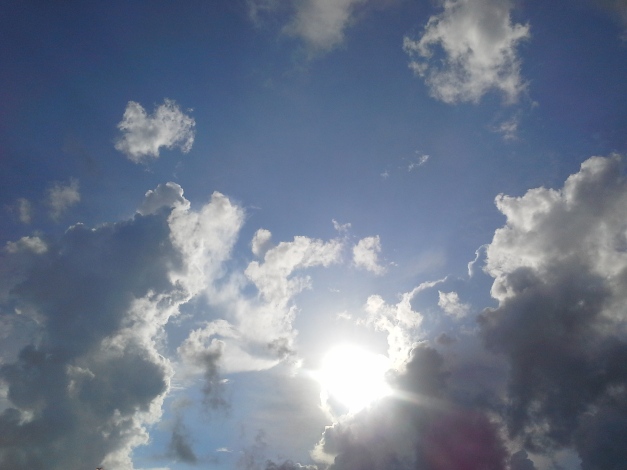 2 comments on “My Own Personal Kingdom”