Prologue for “Chapter 32 – The Berserk Tribute” 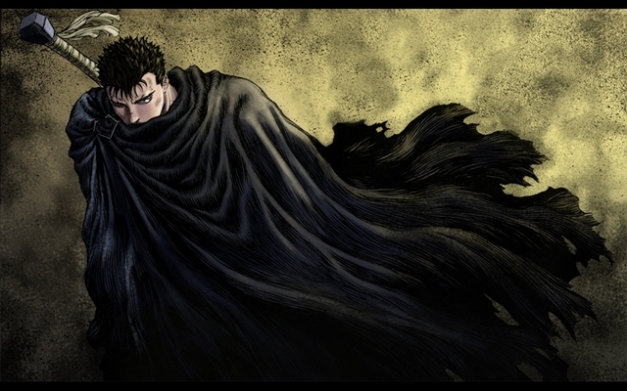 For nearly three years, I’ve had a reoccurring dream of an epic choreographed battle for one of my main characters. His name is Braden Pierce, the godfather’s nephew and one of the most dangerous swordsmen in the syndicate. For nearly three years, I’ve built up the circumstances, the motives, the purpose that drives Braden into a spectacularly violent battle against the best mercenaries an ego-centric, sadistic billionaire can buy.

Finally…after already completing 31 chapters, churning out over 400 pages…Tomorrow I begin “Chapter 32 – The Berserk Tribute”. The title named in honor of the “Berserk” anime I watched back in 2005.

Finally I get to put my dreams to paper. This is weird, right? To dream of the same violence for so long. But its not the violence that I find beautiful…its the martial arts. Its the choreography and how all of the pieces of the puzzle fit together to the groove metal soundtrack in my head. It’s over a hundred cause-and-effect action sequences that blend together like the circuits in a rocket ship. It’s the emotion, the anger, the hidden desire, an explosion of freedom that’s conveyed through brute force and unrestraint action.

Tomorrow I aim to create the most detailed (graphic) action sequence ever written for a novel. And before you judge my guilty pleasure, I ask that you just stay tune for the release of the novel and decide for yourself whether certain nefarious characters had it coming.

The following are raw unedited thoughts from yours truly. Read at your own discretion.

Sometimes I wonder…vainly of course. if Jesus Christ was like me in his twenties. Bearing the pressures of expectancies of family, toiling and committing himself to his craft that was carpentry and fish…all the while resisting destructive impulses and fighting off the waves of crashing temptation of fornication and immorality and drunkenness, and covetousness and acts of violent revenge against perpetual offenders.

Why did it take him till the age of 30 to get baptized? Could it be that he himself understood himself, and recognized that he knew he was not ready to commit himself to that path. I wonder if he too, saw the hypocrisy of other clergy-men and proselytizers who led double lives and promised himself that he wouldn’t become one of them.

I wonder if he too, saw the flaws of boxing himself into one religion when he knew better than most that the way others were worshiping Jehovah, while it may have been earnest and in good intentions, were overall daunting and diminishing to the souls, the different hearts that needed a different approach when it came to them approaching and praying to God.

I say different hearts, because more and more, I’m beginning to believe that not all hearts are the same. Is there a study of hearts? Like the study of psychology, and I realize that my use of “hearts” if figurative and thus, vague and intangible and essentially non-existant. But it’s the feeling we all have, and not everyone feels the same. And I think that’s okay.

For instance, my life is saturated with men and women who don’t know I exist, but they are in my world because I have learned of them, either through news articles or random research. Even those who do know I exist, often and understandably presume that I hate them just because they annoy me. But it’s not hate. My annoyance with them is based on the lives they lead,  and I care because I love them.

The love I bear for them, is incomprehensible by many of my peers because they either don’t believe it or can’t understand it. I weep for families I’ve never had the pleasure to make their acquaintance. My heart is girdled in chains when I hear of victims. My skin peels and crackles into embers when I hear of children sold into slavery, their lives ruined and tainted by the selfishness of adults who care nothing or see nothing beyond a certain point like spiders.

The more I see…the more my heart cries and begs for wickedness to be washed away sooner than later. I sometimes lament being born at all and then slap myself for thinking I’m any better than they who I cry for. Why has such a walking contradiction such as myself been allowed to exist? The strength I continually prayed for has been given to me, and with it I keep walking. But for how long? I wonder, if that’s why I crave purity and innocence for my company.

“Surround yourself with like-minded individuals” they say…

I won’t go so far as to say that’s impossible. But I will say that I’m tired of looking. I am the lone wolf who talks to everyone. I judge everyone as everyone judges everyone. To call me judgmental is to declare yourself judgmental. There’s nothing wrong with it. To accept oneself, the essence of romanticism and inner peace and happiness and an honest unbridled and naked self to present yourself in your prayers…what’s the point of it all if we continue to deny what’s right in front of us. The obvious truths we ignore for the sake of…fitting in?