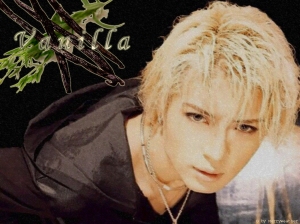 By Spring Break of 2005, during my senior year of high school, I learned that I was accepted into a film school in Tampa, Florida. Knowing my future was secure was a relief. There wasn’t a lot of angst or trepidation in my heart at the time. Just full of hope and an eagerness to leave the nest. Every day since, I woke up, fully aware that it was another day to say goodbye to Georgia and the friends I had come to depend on.

*disclaimer: If you hadn’t read the intro, the following is a personal memoir about my 13 year journey of exploring Korean and Japanese music.

Having already been introduced to L’Arc en Ciel’s “Ready Steady Go” video…I was curious. What else they got? I learned that their genre was called “j-rock” so I searched for that on Limewire.

Apparently in 2004, early 2005, the biggest names in J-Rock were indeed L’Arc-en-Ciel…as well as a Japanese rock vocalist named Gackt. And man…hahahaha! Not gonna lie, I’m about to reveal some embarrassing stuff in talking about these guys.

So, mind you, from 5th grade to 12th, I was raised in Augusta, Georgia…which is considered a more country, gritty version of Atlanta. Meaning, everything you’ve heard regarding the stereotypes of blacks and whites had some truth to them in this city. That’s not to slight Augusta…because the thing is, the people know how they are and they don’t see it as a bad thing. Yes, there’s racism and a somewhat semblance of unspoken segregation, but people seemed cool with that. Most teens tended to stick to their own…

Had I been born and spent my whole life in Augusta, I probably would’ve fallen into a stereotype as well. But my parents were military. I moved around and attended multiple elementary schools ranging from south Florida to a place deep in the heart of Texas called Fort Hood. When you’ve moved around as much as I have, you know the world is much bigger. That America is made up of so many cultures.

And when you’re attending school on a military base, you’re afforded the luxury of just being yourself and making friends, because all the other kids are just like you. They’ve all moved around through their parent’s military transfer. So they understand and are more likely to accept you the way you are. But once you leave the base and start going to school with the civilian folk…yeah. You’ll find how different you are. And I think on a subconscious level, the natives don’t take too kindly to some new kid coming in and messing up the status quo.

My point in mentioning this, is that for years of being more or less stuck in Augusta, Georgia…I wasn’t exposed to a lot of diversity when it comes to the cultures. So when I discovered Gackt and L’Arc-en-Ciel…it was somewhat of a shock that had me questioning my own sexuality.

Remember, this was early 2005, a very conservative Christian time in the country. Lady Gaga wouldn’t blow up till late 2008-ish. And you see, in Japan they embrace this thing called “Visual Key”. Plainly put, it’s straight up androgyny, a style where men make themselves appear like women. They wear feminine makeup, eye-lashes and longer hair where it becomes difficult to discern whether they are male or female.

L’Arc-en-Ciel’s lead singer was notorious for this. Even without the make up, Hide looks like a girl. And just to make sure I wasn’t going crazy, I’d eventually ask my first roommates in Tampa to rate his appearance in “Blurry Eyes” on a one-to-ten scale. And my roommate without hesitation said… “I’d hit that.” As you can imagine, I laughed for some time. Not just at the humor in it, but the realization that it wasn’t just me. I’m not gay and I don’t think I should feel bad if I’m fooled by a person’s appearance.

In my introduction, I mentioned the importance of melody and how this was a key feature that separates Japanese music from the popular U.S. mainstream music at the time. L’Arc-en-Ciel and a girl group called Puffy Amiyumi were awesome at this. It’s like, you can hear the simplicity of a memorable explosive sound without too much manufacturing, or noise in my opinion. Puffy’s “Planet Tokyo” was a perfect example of this. Just pure rock with a melodic sound coming through with their harmonious vocals.

From April 2005 till July 2005, I dined on L’Arc-en-Ciel’s “Awake” album and discovered other awesome hits like “Lies and Truth,” “Stay Away” (which has a cool dance break at the end), “Killing Me,” and “Jiyuu No Shoutai”. Hyde’s lead vocals were amazing. To this day, I still think he’s one of Japan’s top vocalists along with Dir En Gray’s Kyo, and One Ok Rock’s Taka if he can ever stop repeating “Whoa-whoaa” in his songs.

As I continued to search Limewire for more, I stumbled across a music video called “Vanilla” by Gackt…and Gackt…

Hahaha, not going to lie. I honestly thought Gackt was so cool in that video. I liked his style, this swagger I had never seen before. The dude couldn’t dance for shit, but he moved with such confidence. “Vanilla” sounds like a Japanese version of Ricky Martin’s “Livin’ La Vida Loca” in retrospect.

It’s interesting how I discovered L’Arc En Ciel before I discovered Gackt. Because I’m not sure how impressed I would have been with Laruko had I found Gackt first. Gackt is a virtuoso. Much like Prince, Gackt can play multiple instruments and in some of his best hits like “Miserable” or “Mirror” he likes to infused classical elements like a penetrating violin throughout his songs. I loved that. The scene was foreign to me. The scene was new. Spreading my horizons, expanding the world of existence in my mind.

July 3rd, 2005 was the day that I left home and came to Tampa, Florida for my college orientation. That summer was the best summer of my life. And the music made it all the more memorable. The drives to the beach, my spot by the water, the sense of exploration and adventure was exhilarating. And with me, I had a soundtrack of L’Arc En Ciel, Gackt, a number of upbeat anime songs, and I confess…the soundtrack of “Need For Speed Underground,” in particular, the song “Fortress Europe” by Asian Dub Foundation:

By mid-July, I was so enthralled with Japanese music that I started printing out the romanticized lyrics. By romanticized, I mean the English spelling of the Japanese words they were saying. Because I wanted to sing it. I listened to it so much that I memorized the enunciations and “Ready Steady Go” was the first song I memorized. Second was Gackt’s “Vanilla”.

In researching Gackt to find his lyrics, I discovered he was once part of another band. I thought that was interesting. For a band to have an ace like Gackt fronting them, they must have been something special.

Malice Mizer was the name of the band. And the first song I downloaded from them was “Beast Blood.” If you read my introduction…then you know how fond I am of metal. Up to this point, I’d only been exposed to a rock sound which isn’t that heavy on the bass or kick-drums. L’Arc En Ciel isn’t exactly a band to get your blood pumping but more so to uplift and encourage you to get up and go.

“Beast of Blood” begins with this eerie almost vampiric melodic organ before immediately jumping into a mosh-inducing guitar riff with rapid kick-drum action. I was impressed. They’re no Slipknot, but I honestly didn’t think Japan was capable of something with such angst. Not from what I’ve seen thus far.

In downloading that, I came across another singer of the same genre named Hide, formerly of X-Japan. Hide was amazing. In 2005, I’d merely skim the surface of his masterpieces and it would take me years to fully comprehend how much he’s accomplish with his genius and creativity. That July, I dished on his hits, “Dice,” “Pink Spider” and X-Japan’s “Scars.”

But it’s just a phase, right? Up to this point, I’d been listening to Japanese music for the better part of 2005. Those were good times and I was so happy to have found those awesome songs. But how long could this carry on?

Whelp…If I had to give an individual artist credit for keeping me locked in place…that would be Miyavi. If it weren’t for him, my j-rock phase would have probably ended that year. You see…there are just some songs that never get old no matter how much you play it out. For me, the tunes of “Girls be Ambitious” and “Pop is Dead” make the cut.

By August of 2005, two websites were starting to encroach upon the live of teens and college students. That’d be MySpace and Youtube. If you’re searching for j-rock like Hide and Malice Mizer…its inevitable that you’d come across a Japanese singer with lip-piercings, metallic hair, staring at you as if he’s daring you to click on his video and not be hooked.

Of course, I’m no sucker. So I resisted the temptation, at first. But on MySpace, I kept seeing him pop up on other user’s web pages. In particular, I befriended a girl from Utah of all places. We communicated over our love of J-rock and it was she who convinced me to give him a try. “Pop is Dead” was the first video I saw of his and the rest is history.

It was August of 2005. I had just turned 19 and for my birthday I decided to check out this library in Clearwater, which would eventually become my spot by the water. It was a blazing hot day, but I blasted Miyavi’s songs over and over again.

He’s playing the guitar himself and its unlike anything I’d ever heard. It almost doesn’t even make sense, experimental, but successful with each case. It’s as if he’s doing his utmost to avoid any and all traditional patterns, rhythms, or rules of rock and metal. He’s doing what the fuck he wants. What sounds good to him, his unique individuality. I loved it. This was what I was looking for in venturing off to college. For too long I had been steeped in stereotypes and limited cultures where I barely saw a place for myself. With the discovery of jrock and the adventure of learning a new city, meeting new people, and receiving an education that could lead to a bright and prosperous future…hope was alive and well.

Click to Read Chapter III. Intro to Kpop & The Rise of DBSK