Allow me to take a moment to talk about Japan. Because for the last ten or so chapters, I divulged how I got into Korean music and started to explore and appreciate different the genres. However, during this time, I’d say late 2007, early 2008…there were some Japanese artists that caught my eye as well and it’s just unfortunate really.

Because the truth is, there are SOOO MANY Japanese bands, singers, and groups out there. Just like in the states. And unless you’re with a powerful label backing your play, there’s no way you’ll be discovered by a mainstream audience and reach a substantial level of success.

I’ve already written a chapter about a group called KAT-TUN. Yeah, back in 2006-07, it was undeniable that these guys were the undisputed kings of j-pop. I say it was undeniable, based on their popularity, the time they spent at the top of their charts, and their record sales.

However…in my eyes, that don’t make them the best. In my eyes, the best goes to the artists showcasing the better talent, the better songs, the better sound, the better performance. Of course, it goes without saying that I’m not Japanese, so what you’re about to get is the perspective of a then 21-year-old straight male living in the states. On that note, let’s begin with W-INDS.

Haha! So, at the time, while I was in college, I was into this anime that came on Cartoon Network called “Shin-Chan.” The ending theme song was cheesy as hell, but it made me smile. The above song of “Paradox” is a little cringy to be honest, with the random shots of juveniles just staring at you as if you stole their bike. But the choreography was better than I had seen from a lot of other Jpop boybands, especially KAT-TUN.

W-INDS consisted of three members, the lead vocalist, Keita Tachibana and two backup singers/dancers, Ryuichi Ogata and Ryohei Chiba. To be honest…it’s quite difficult to really see W-INDS as a group or boyband. Because on every track I’ve heard of W-INDs, it’s mainly Keita holding down the vocals and I barely hear the other two. It’s as if, the music label paired Keita with the two backup members purely because they didn’t think he was impressive enough to perform on his own. Mind you, they debuted in 2001 when Keita was merely 15-years-old.

Despite all this, W-INDs was super popular in the 2000s, selling in the six figures with each track. I gave them a try and the only two songs I really liked were “Paradox” and “Kuwari Yuku Sora”. In particular, “Kuwari Yuku Sora” was a very upbeat and positive track. I remember listening to that song many a nights. No matter what I was going through with college, lady drama, or the struggles from being so overweight and lonely…that song gave me hope in a strange kind of way.

At the time, I didn’t have many friends that I could rely on to give me a daily pat on the back and say, “chin up, everything’s gonna be alright.” Thus, the music helped me to internalized the confidence, to pick myself up and keep going. Hahaha! In the above music video, you’ll see what I’m talking about. I wish I had such a group of friends as a dependable support system. But I didn’t. So I dreamed that I did. And hope that one day, I would.

NOW THEN…let’s get into Arashi. Because if I had to pick which boyband was the “best” in all of Japan…It would hands down by none other than Arashi.

So…back in 2006-ish when I heard that DBSK was venturing off to Japan to try and break into the Japanese market…I wondered why they had such a difficult time. I’d go on to learn that KAT-TUN was the reigning kings, which made sense. But it was more than that. It’s sort of like how Korean artists want to break into the U.S. mainstream market. They’re failure shouldn’t be a mark on their ability or the creativity of their songs. It’s just that the U.S. already has a plethora of bands and singers all vying for that top spot. Competition is stiff. And if you’re not bringing anything new to the table, you have a huge mountain to climb.

When I discovered Arashi and W-INDs, this was my conclusion. I wondered why I hadn’t discovered them sooner when I was learning about L’Arc en Ciel and Miyavi back in 2005, but it could have been that Youtube was still young and users hadn’t gotten around to uploading Jpop bands. I mean…there’s hundreds of them.

And remember what I said at the beginning of this chapter? About how if you don’t have powerful label backing your play, there’s a slim chance of you attaining mainstream success. Whelp…just like SM Entertainment in Korea where we have DBSK following in the footsteps of their predecessors H.O.T,…in Japan, KAT-TUN followed in the footsteps of a group called Arashi. These powerhouse groups were founded and developed by a talent agency called Johnny & Associates.

Johnny & Associates is perhaps one of the most influential agencies in Japan…and in my opinion, justifiably so. They’re the ones who founded and debuted SMAP in 1991. SMAP would go on to become the most iconic boyband in Japanese history. But I’m not about to go on about SMAP. I’m sure they’re all that and a bag of chips, but sadly, that’s from a time before my own.

When I first Arashi’s “A-RA-SHI” music video…despite it’s retro sound with horns in what seems to be a pop track…I was really impressed. Until then, I’d yet to see a Jpop group where more than one member contributes vocally. In Arashi, the members sound different from one another and they perform synchronized dance moves. More than that…Arashi was versatile. Like KAT-TUN, they had a solid rapper to break up the vocals. And of course, if you’re read my memoirs…you know I love me some pop that infuses the rockin’ sound of a guitar.

Arashi was the first j-pop boyband in which I liked more than just one or two songs. Hahaha! Even as I look through my collection, I can’t stop smiling at how much I enjoyed their songs back then. “All or Nothing” sounds like it could be a cheesy hip-hop track, but for me, it worked.

Arashi – “All or Nothing”

“We Can Make It” and “Sakura Sake” are also classics I played out during those long, fantastic nights as a delivery driver.

Consisting of five members, allow me to introduce you.

Jun Matsumoto. I remember seeing a video of Matsumoto giving KAT-TUN’s Akanishi a hard time on a TV show. It was quite entertaining and I was happy to see the dynamics weren’t as strict as it is seemed to be in Korea. Matsumoto might be Akanishi’s senior, but Akanishi wasn’t putting up with Matsomoto’s live (playful) antagonism.

Johnny & Associates has favorites. Unlike most of the boys who had to audition to earn a spot as a trainee…Matsumoto just had to fill out an application and was chosen by Johnny personally, receiving a phone call and everything when he was just 12-years-old.

Sho Sakurai is the group’s main rapper and honestly, I have to give him a lot of credit. Because let’s be honest. A lot of rappers in these Japanese boybands, they sound like they’re mainly there just because the group “has to” have at least one rapper to compete in a saturated market. But Sho’s been holding it down since the beginning with their first single. “Pika-Nich” couldn’t have happened without him. And his rap @ 2:50 was awesome in “Sakura Sake”.

Masaki, Aiba. I honestly don’t have much to say about him. Not exactly one of the stand out members, but a viable contributor nonetheless.

Ninomiya has a good voice. His verse in “We Can Make It” shows that he can carry his own. Also, it was cool to see that he was featured in Clint Eastwood’s “Letters from Iwo Jima,” starring as Private Saigo. 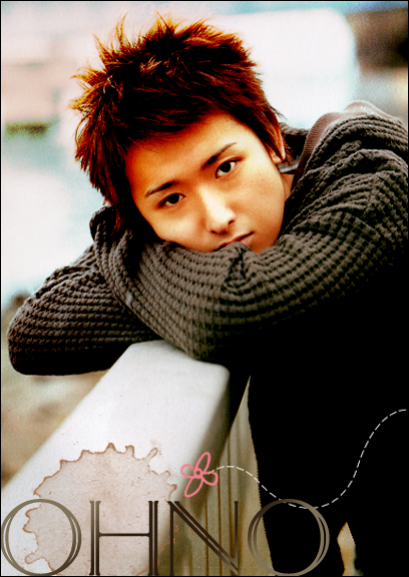 Last but not least is the group’s leader, Satoshi Ohno…This guy. Anyone who says that Arashi wouldn’t have been Arashi without Ohno, could put up some good arguments. He’s not only the leader and lead vocalist, he’s also a choreographer and the best dancer on the team. Back in 2007-08ish when I was into this group, I used to study his dances relentlessly.

Because honestly, they’re pretty simple in movement. But he does it so well. It’s his skill in performing the choreography that sets him apart. Even in a cheesy performance such as this, when he had a solo performance at the Tokyo Dome:

In the above video, you see a young Satoshi all decked out in red, performing a retro song that had to have come from the 80s or early 90s. From that alone, you can tell that this guy really didn’t need to be in a group. He could have done well all by his damn self.

In the end…It was by the middle of 2009 that I stopped listening to Arashi. It wasn’t because they weren’t good or that I outgrew them. But I think it might have been the downside of releasing so many singles so soon one after the other. If you check out their Singles Discography Page you’ll see that if you even blink, you’ll probably miss their latest release. Since 2003, they’ve had 51 singles that all hit number one on the charts. And while they’re singles are clearly good, in my eyes they were hardly outstanding, especially when Korea was starting to make a big bang in the scene.

Haha, no lie. From what I saw, even though Arashi and other cemented groups like KAT-TUN continued to produced consecutive hits, by 2008, after years of hard work and determination, DBSK was truly rising to the occasion. And by 2009, Big Bang wouldn’t be far behind them. But that’s for upcoming chapters.

So I’ll leave you with this. “Truth” was the last outstanding song I heard from Arashi back in early 2009. Indeed, Arashi’s music will always have a place in my heart. When it comes to greatest boybands in the world, not just Japan, Arashi’s definitely in the top five.