An Obvious Flaw With Democracy – A Romanticist Point of View

NOTE – Stage in the Sky is not a political blog, nor does Rock Kitaro pretend to be an expert in political science. These are just the opinions of a Romanticist philosopher based on what’s observed.

As much as I try, I cannot ignore the news. Its so obvious, the agenda of each news outlet. Fox News absolutely hates Hillary Clinton. CNN abhors Trump while putting Clinton on a pedal stool. And the general public supports Trump behind closed doors, according to his polls, while the popular opinion seems to be in favor of Bernie Sanders. Feel the Bern, they say.

America is divided, as it’s always been. Only in times of a common enemy do we stand together like our favorite heroes. Some examples of this are The American Revolution after the oppression of Great Britain, WWII after Pearl Harbor, and most recently the Iraq War after 9/11. But on social issues, economic issues, and issues relating to nationalism and religion…we differ.

And that’s alright. Such is a democracy and its good that everyone’s coming up with their own opinions…or do they?

This election, like the last one, touts a certain presidential candidate as a racist, bigot, who hates specific groups of people the same way they said Mitt Romney was launching a war on women.

What I believe is happening is that the news, Hollywood, and everyone in a position to influence a following are culprits with perpetrating a narrative, a conclusion, or in some cases a fiction in which the masses mindlessly swallow it up and regurgitate. Just today, I was checking my facebook messages when, in the side scroll, I see Kerry Washington and a number of celebrities calling for people to “Stop Hate Dump Trump.” Of course when I clicked on the link to see if Washington or the other celebrities had a solution by supporting another candidate other than Trump, there was none to be found.

This is a problem when it comes to Democracy…

The problem with Ms. Kerry Washington’s campaign is the same problem I had with Samuel L Jackson’s commercials in the 2012 elections where he shouted “Wake Up” in favor of voting against Romney. I believe these are forms of manipulation or propaganda, quite similar to the popular kids in school promoting some fad and calling others lame if they don’t jump on board. 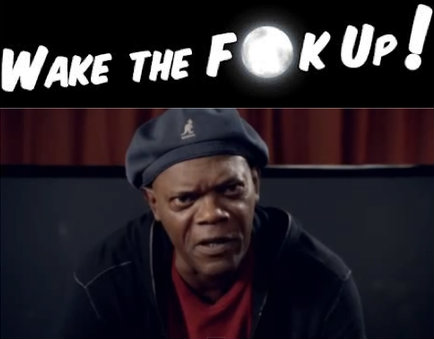 It would be one thing if the general public took their campaigns for what it is, that being their own personal opinion. However, in our society, people are afraid to be alone. If there isn’t a “popular” celebrity promoting an opposing opinion to the likes of Ms. Washington’s…people may feel like they’re alone on an island in their own thoughts. So they abandon those thoughts and join in with the crowd just like that.

Another problem with democracy is that in today’s society, you’ll be hard pressed to find people who both love democracy and have a strong sense of national pride. It may be just me, but I get the feeling that people these days care very little about the collective community, but focus more about themselves as an individual when they choose to vote.

Hahaha. No. I’m not a communist. To be honest, I don’t know much about any alternative types of government. So you know what I’m going to do? EDUCATE MYSELF! It’s as I always say, the best part about being alive is self-improvement. Thus, I adjusted my glasses, drank some ice water, turned on some Nujubes, and dove into research.

First thing I wanted know was whether or not I’m alone in thinking there’s something wrong with the picture of Democracy. My friends at Wikipedia helped me out. Yes, I used Wikipedia. Give me alternative resources and I’ll take consideration to amend my thoughts because unlike many, I adjust my views based on what I learn. Here are some excerpts I found.

“The 20th-century Italian thinkers Vilfredo Pareto and Gaetano Mosca (independently) argued that democracy was illusory, and served only to mask the reality of elite rule. Indeed, they argued that elite oligarchy is the unbendable law of human nature, due largely to the apathy and division of the masses (as opposed to the drive, initiative and unity of the elites), and that democratic institutions would do no more than shift the exercise of power from oppression to manipulation.”

In the essay “Federalist No. 10” by James Madison, he contended that republics “were superior to democracies because republics safeguarded against the tyranny of the majority.” After Shay’s Rebellion in 1787, Madison openly argued that government ought to “protect the minority of the opulent against the majority” and that unchecked, democratic communities were subject to “the turbulency and weakness of unruly passions”.

While I agree with James Madison’s essay, because it in fact has come to fruition the way citizens vote for representatives who then vote for laws, it seems to be human nature for people to come together to create a majority…you know. Like a gang. Not to mention, senators and congressmen can keep running till their heart’s content. It may just be the folly of congregations that this will always be the case. A popular and unpopular…

I just came across an opposition to Madison’s article that I’d like to share with you. According to Garry Willis’s “Explaining America” he argued that Madison’s framework does not necessarily enhance the protections of minorities or ensure the common good. Instead, Wills claims: “Minorities can make use of dispersed and staggered governmental machinery to clog, delay, slow down, hamper, and obstruct the majority. What Madison prevents is not faction, but action. What he protects is not the common good but delay as such”.

I can’t retort Willis’s thoughts on the matter, however, I will say that I failed to come across a solution. It sounded as if Willis’s position was just to shoot down Madison’s idea without offering a solution himself. Maybe he has offered a solution and I just couldn’t find it. If he didn’t, I hate that. Yeah, I get that pointing out flaws in an idea can help stave off from bigger problems the solution has the potential to create…but give us your grand idea as well. Bring something to the table. Again, it brings me back to Ms Kerry Washington’s campaign of “Don’t vote for Trump” while at the same time refraining from publicizing who to vote for in his stead. I wonder what campaign they’ll come up for Cruz if he gets the Republican nomination, but I digress.

Also, I want to point out that when I say “Majority,” I’m not necessarily talking about a race as I’ve found on many articles that broached the subject. For me, the majority refers to popular opinion and the mob mentality that seems to dominate our airways, social media, and cultural census.

It brings me back to a facebook post where I asked if it’s true that “There is no right or wrong, only popular opinion.” People responded that it’s not true. They said there is a right and wrong and its defined by the Bible. The problem is that more and more it seems like the majority of America is turning away from religion and the word of the Bible.

Thus, one could argue that Christians are increasingly becoming the “Minority”. Of course, I could be wrong. It could be that the United States is still dominated by Christians who have been dubbed, I think pejoratively, “The Silent Majority” or simply “Conservative Christians.”

Finally, I’d like to bring Plato to the forefront as I’ve come across and article in which he lists the top five forms of government from best to worst. It goes

The ruling class, made up of the aforementioned philosophers-kings (who are otherwise identified as having souls of gold);

The auxiliaries of the ruling caste, made up of soldiers (whose souls are made up of silver), and whose job in the state is to force on the majority the order established by the philosophers. T

The majority of the people (souls of either bronze or iron), who in contrast to the first two classes are allowed to own property and produce goods for themselves, but are also obliged to sustain with their own activities their rulers’ — who are forbidden from owning property in order to preclude that the policies they undertake be tainted by personal interests.

I encourage you check out this link to read more about the regime – https://en.wikipedia.org/wiki/Plato%27s_five_regimes

Essentially it stresses the importance of education, for leaders to be selfless and upright individuals. Two qualities, you’d be hard press to identify in our politicians today.

Plato states that “Wealth, fame, and power are just shadows of the Good and provide only hollow and fleeting satisfaction. It is only the knowledge of the Good in itself that gives man enduring and real happiness. Thus, the philosopher who is exposed to metaphysical contemplation is not tempted to abuse his power in his pursuit of material goods, and his state policies are therefore dedicated to establishing only the Good in the state, not his personal interests.”

When talking about democracy, Plato goes on to say, “Oligarchy then degenerates into democracy where freedom is the supreme good but freedom is also slavery. The democratic man is the son of the oligarchic man. Unlike his father, the democratic man is consumed with unnecessary desires. Plato describes necessary desires as desires that we have out of instinct or desires that we have in order to survive.

Unnecessary desires are desires we can teach ourselves to resist such as the desire for riches. The democratic man takes great interest in all the things he can buy with his money. He does whatever he wants whenever he wants to do it. His life has no order or priority.”

I’ll end my essay on that note. I really like the idea of Plato’s Aristocracy, but at the same time, something tells me there’s more to it than what I just read. My thoughts are not cemented and I’m open to discussion if you have any thoughts on the matter. I suppose I mainly wrote this essay to convey my frustrations of living in a society where the media’s manipulation is so freaking obvious…and when I read the comments on published articles, it feels like the manipulation is only obvious to me.

That’s a dangerous sentiment with deep-thinkers such as myself. Because my interpretation of “crazy” is exactly that, when reason and logic only makes sense to yourself.