I was going to include The Trax in with the last chapter, but then I thought, nah…The Trax deserves their own. As one of the best rock bands to come out of S. Korea…Where do I begin. Let’s start with 2004’s very own “Paradox”.

Haha! So…from what I’ve covered (from 2005-2009 at this point), South Korea isn’t exactly known for its hard rock and heavy metal. In the coming years of 2010&2011, I’d eventually discover bands like Buster, Yellow Monsters, and Tranxfixion, but up to this point, the only other metal group I had heard of was Novasonic, Seo Taiji, and props to Moon Hee Jun for his grungy solo albums. But if you contrast this with Japan’s plethora of metal bands and don’t even get me started when it comes to the states…yeah, safe to say, South Korea doesn’t have a lot of diversity with hard rock. I’m talking HARD ROCK.

Don’t be fooled. If you check out websites like Soompi and Allkpop, they’ll tout some bands as hard rock or punk bands, but that shit’s so soft. Like CN Blue or FT Island. Get outta here with all that. I give FT Island props for their hit “Pray” in 2015. But that’s it. Everything else is soft-rock.

But when it came to The Trax… The only reason why I hadn’t written a chapter about them sooner was because, sadly, up to this point they had only released one album. Which is honestly the biggest tragedy of all. “Paradox” was released in 2004. So, from 2004 till 2009, only one album. This shows that either S. Korea wasn’t into the Hard Rock sound, or SM Entertainment doesn’t know how to manage rock stars. Because one thing was undeniable, The Trax was overflowing with raw talent.

Oh, you didn’t know? Hell yeah, The Trax, the mother-fucking Trax was founded and produced by SM Entertainment, the company known for its pretty boys like DBSK, Shinhwa, and Super Junior. In fact, the first time, I legit heard of the Trax was in DBSK’s music video, “Triangle”. As awesome as the song was (with its amazing use of Mozart), what made the song timeless was the rock provided by none other than the Trax.

I’m sorry, where are my manners. Allow me to introduce the members. 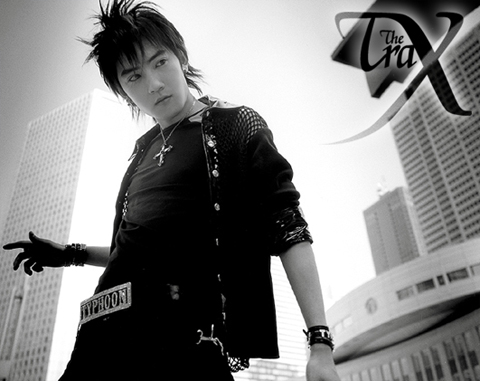 The lead singer is a guy name Jay Kim, aka Typhoon. The dude can rap and sing and you can tell he was obviously influenced by Linkin Park. Jay was one of the legendary rookies who auditioned for H.O.T’s Moon Hee Jun and Kangta when SM Entertainment was scouting for trainees. Some of those trainees also included DBSK’s Xiah and Super Junior’s Eunhyuk. To be selected with the likes of them, is an honor in of itself. The below video shows them auditioning.

In the above audition video, it starts with DBSK’s Junsu, then Jay Kim’s rapping…and then you see a dainty figure first playing the piano before moving on to the electric guitar and straight up shredding it. This is No Min-Woo, aka Rose.

Min-Woo was a striking figure in Trax’s early days. One of the reasons why The Trax only released a single album in the span of five years was because Min-woo left the group in 2006. It goes without saying that I kinda blame him for their lack of success and production, but I get it. The dude is super talented, and to put him behind a drum set does him a lack of justice. Min-Woo would eventually go on to be the most successful member from this band, prospering as an actor and bonifide artist in his own right. 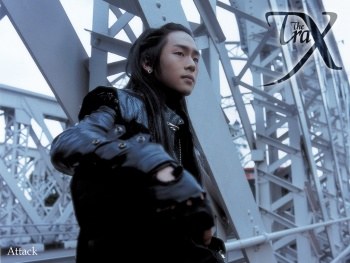 Attack was the bassist. I don’t have much to say about him, other than he also appears in the above video at the end, showcasing his skills with the bass guitar.

Then there was Kim Jung-mo, aka Xmas, the guitarist. I honestly don’t have much to say about him either, other than he fit right at home with SM Entertainment for his androgynous look. I heard he was a close friend of Super Junior’s Kim Heechul as well, even eventually going on to form a side project with him.

I’m just now writing about the Trax, because it wasn’t until the summer of 2009 that I really dug into their repertoire. As I said, I knew about Triangle, Paradox, and Scorpio…but in the summer of 2009, I discovered they had produced more music that somehow went under the radar with me. In particular, two songs that to this day are definitely on my top ten list. And every time I listen to it, as much as I love it, it pisses me off because I know they deserve more acclaim than they got. One was, “Are You Ready.” The other was an awesome track called “Vampire”.

Apparently, SM Entertainment recognized that the S. Korean audience wasn’t too big into the hard rock sound, so they sent The Trax over to Japan. Here, The Trax released singles like “Rhapsody,” which included two of my favorite tracks “Vampire” and “Criminal Scream.”

Vampire was a song that oozed rebellion and defiance. I don’t understand the Japanese language, so I took the liberty of interpreting it however way I wanted. In my head, I daydreamed about performing the song and using the word “Vampire” as a metaphor when it comes to so-called friends and family who leach and try to suck the joy out of your life by getting you to think, behave, and live life the way they expect you to.

It’s also a double entendre in the sense that this was around the time “Twilight” was blowing up. Everyone wanted to be a vampire and I was getting sick of the culture. So in my daydream music video, I imagined myself the lead singer who’s also a vampire hunter, killing all those bloodsuckers and shooting a cross into the ceiling where sunlight comes in and burns them all alive. Yep…that’s my imagination. So when people saw me on the treadmill, power-walking the calories out of my system with earbuds in my ears…that’s what I was thinking about when I heard this song.

I would like to give an honorable mention to another rock group that I often listened to in tandem with The Trax. Don’t laugh, but My Chemical Romance’s “The Black Parade” was one of the greatest albums of our generation. Nevermind how awesome the title song was, or how badass “Teenagers” was…my favorite song to sing in my head was “Mama.” Loved it!

In the end. The Trax will definitely go down as one of the best, underrated rock groups in Korean history. If they had produced more songs during their tenure, it would have been indisputable. But sadly, as the years went by, so did their sound. I remember one of the last songs I downloaded from them was “Oh My Goddess.” Which was a great song! But definitely not a classic Trax song. I don’t want to be one of those fans who demands and dictates what a band should produce, but I do think it would be wise not to do what anyone can do. And Oh My Goddess was a soft rock song that FT Island or T-Max could have put out. The Trax was better than that.