Investigating KeNedra’s death, Cloud and Griffin interrogates her family and the high school majorette team she was a part of. Cloud works his magic, his gift of persuasion to try and get information out of the grieving mother, but Det. Griffin throws his weight around as an officer of the law, careless to tense history between African-Americans and law enforcement. Well…Cloud thinks its carelessness…until Griffin makes a provocative revelation that threatens to jeopardize the entire case. 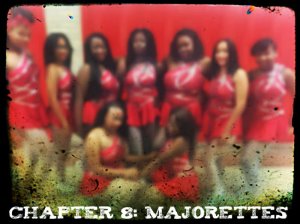 It’s a quarter past twelve when Griffin and I pull up to a middle class home in the subdivision of Coventry, only a fifteen-minute drive from the Waynesboro Plantation. I’m annoyed even before I’ve step out the car. As if the pending interview isn’t daunting enough, another nuisance has presented itself in the form of a rugged middle age hippy in a brown leather jacket, chain-smoking on cigarettes as he leans against his busted up yellow bug.

“Alright, now who the hell is this?” Griffin asks.

“Jimmy Coolidge. A persistent nut-job blogger working for one of Atlanta’s most widely read outlets. Mark, you’re looking at a man who thoroughly believes aliens walk among us. That’s Jimmy. Welcome to my life,” I groan before exiting.

Griffin’s never met the guy, but sticking to the “bro code,” he mirrors my displeasure. Jimmy’s scruffy appearance, from his ponytail, to his beer-stained eyes and that peach fuzz of a goatee…it’s like he forgot to fade along with the rest of the 70s. No, he didn’t forget. It’s more like he saw opportunities to throw a monkey wrench in the same corporate machines all his old friends sold out to.

He wheezes in his laughter, letting the cigarette drop from his fingertips before starting off in a jab-step approach. Griffin stops in the middle of the sidewalk and stares in bewilderment as if he was watching a mime performance. I’d like to continue on to the front door but halfway there, I have no choice but to turn around and confront the inevitable confrontation.

“Sir! You need to go.” Griffin says, pointing off down the street.

“Hey man. Hey. Hey. Hey. This is public property, fella. I’m not on the resident’s lawn. I have every right to be here. Hahaha! Howdy, Cloudy! See you caught yourself another doozy. Funny how these bizarre cases seem to keep falling right dab in your lap.”

This S.O.B… He’s way too loud to be spouting that crap. Exercising restraint, I approach Jimmy with my palms pressed as if I’m about to pray. Jabbing my spear-like hands at the center of his chest, I whisper, “What do you want, Jimmy?”

“Screw that. You don’t owe him a damn thing,” Griffin grunts.

“Oh no, you don’t know bout’ me!” Griffin asserts. “But you gonna find out real quick if you don’t get the fuck out of here.”

“What the hell you talking about?” Griffin barks.

“The girl’s behavior. KeNedra. I’m here for the exact same reasons you are. I want to know if she’s displayed these strange signs before.”

“What are you talking about!?” Griffin barks as I play the buffer.

Jimmy snickers, “Cloud knows what I’m talking about. Look at him. It’s why he’s here too. He’s thinking the same thing I’m thinking. KeNedra Thompson was clearly possessed. That’s right! Possessed by an evil vindictive spirit. It’s the only thing that makes sense. Tell him, Cloud.”

I shoot my sights to the front of the house. I’m checking the blinds and the windows, scanning for any movement. I really hope no one heard Jimmy’s little theory otherwise the questions I had lined up would’ve been a completed waste of time.

“Are you insane?” Griffin asks him.

“Yes! Like I said!” I blurt out in an explosion of angry whispers. “Look, Jimmy. I don’t know how you got your dick-grabbing hands on that suicide video and I don’t want to make a thing of it. Right now, I need you to leave. You know me. If there’s anything crazy or supernatural, I’ll give it to you. All right? But right now you gotta let me do my job. Now, get the hell out of here. Please!”

Jimmy backs up with puckered lips as he returns to his jalopy. “Aight, Cloud. But hey! I’ll be around.”

“Supernatural?” Griffin asks as we watch Jimmy’s backfiring vehicle scoot off down the road. “You think KeNedra was possessed?”

“Seriously, though. You don’t believe in that kind of crap do you?”

“Mark, I swear to you. I only believe what I see with my own two eyes.”