The Knights with No Lords: Chapter 7 – The Trossachs (Fantasy Fiction)

Fight! Battle breaks out as an angry horde of blue-painted Vikings pursue Gawain and Isolde through the thick of the woods. It’s an action-packed chapter where Gawain shows off his superior swordplay and Tristan, his Herculean strength. At last, Morgan and Gawain are reunited. And while it should be a joyous occasion… 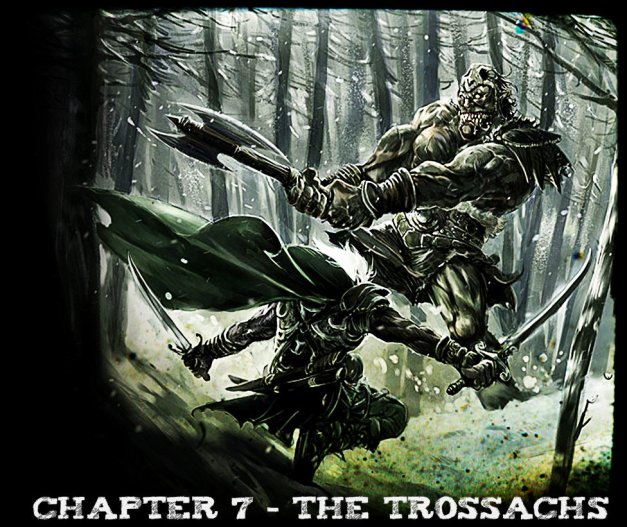 Chapter 7 – The Trossachs
By Rock Kitaro

Racing for their lives, Gawain, Isolde, and the Hibernians scraped through wet leafy branches. A flood of furious Picts chased Isolde’s group through the wet woodlands of the Trossach. Three minutes felt like an hour. Isolde rode at the forefront with Gawain and Sir Ewangish right behind her. Five knights assisted from the rear but one of them was fading out from blood loss to an arrow wound.

King Drest’s four elite warriors in blue chalky paint were leading the charge and they were closing in. If Isolde had hesitated in deciding which path to take, the Picts would’ve overwhelmed them in less than ten seconds. It wasn’t until Gawain narrowly dodged his third low hanging vine that he realized Isolde had no idea where she was going. She was slowing down with doubt sinking in.

“YAH!” Gawain yelled as he spurred with intense fervor.

Gawain quickly sped up and took the lead. He wasn’t familiar with the Trossach woodlands but he was calm and collected, wise enough to follow the flow of water to avoid getting stuck at the dead end from some rising ground. The terrain fluctuated with gorges, steep hills, and drop-off cliffs. Rising tree roots could snag a horse’s hoof at any moment and the shallow ponds were actually veiled sinkholes. Dense vegetation made visibility poor. He could barely see beyond the sharp turns. Gawain knew it was only a matter of time before their luck ran out.

He spotted a glimmer of sunshine and followed the light. Within seconds, Gawain’s company emerged from the thick woods and into a clearing. It was a vast open meadow in the middle of the forest, an oasis of rich green grass and sunflowers.

Halfway across the meadow, another force came charging out of the tree line at full speed. These six newcomers were all suited in black armor with their leader wearing a flashy red scarf flowing from his neck. Gripped with fear, Gawain pulled on his reins for an abrupt stop. Princess Isolde and Ewangish struggled to do the same.

Pellinore raised his helmet visor and examined Gawain with the same bloodthirsty stare from the day they first met. They locked eyes for less than a second but time slowed as they gradually began to recognize each other. Pellinore was so impressive. His long serrated claymore was drawn and ready to carve into flesh. It wasn’t until Gawain noticed the pink vertical scar over Pellinore’s left eye that he was certain.

“HA! Found him!” Pellinore slurred with a thick wad of flying spit.

“Help us! Picts!” Gawain begged, pointing over his shoulders.

Pellinore looked and was instantly mesmerized by the boldness in Isolde’s sky blue eyes.

With that, the Brood of the Black Bloods stormed the Picts head on.

“I believe so,” Gawain said, breathing hard but smiling with relief.

“Away!” the princess ordered.

Pellinore gripped his claymore with both hands as he charged between two of the blue elite warriors. Sweeping in a straight line, from left to right, Pellinore sliced through the pair with a powerful swing. The disemboweled bodies of his victims fell from their horses and Pellinore was just getting started.

Kanish, Balto, Jeremy, Dantry, and Barxy followed Pellinore to corral the Picts in an all-out melee. It was brutal. The six mercenaries fought like a well-oiled machine. Balto would wound a man and Kanish would follow up for the kill. Barxy was a bear the way he leapt from his horse to drag two soldiers down.

Jeremy and Dantry followed Pellinore into the thick of the forest. The Picts were losing men at a rapid pace and broke from a clustered group to spread out. Pellinore dismounted and gave chase.

Like a wolf on the prowl, he leaped over tree roots and stumps without skipping a beat. His intense gaze remained focused on the prey. And when Pellinore closed in, he threw everything he had into each swing, severing through sword, armor, flesh and bone. Jeremy and Dantry merely followed to put Pellinore’s victims out of their misery.

Isolde, Gawain, Ewangish and the four Hibernian knights continued south through the Trossachs. The woods were so dense. A web of slender but sturdy trees combed through their group and caused them to fan out. The enemy was coming from every direction and soon, the princess found herself surrounded with no ally in sight.

Suddenly, three wild-haired Picts came pouncing from the trees. They startled Isolde’s horse, causing it to rear up high in the air. She screamed and nearly had a heart attack, hanging on for dear life. The Picts groped and clawed at her cape, latching on to pull her down. Then, a flash of gold came dashing by.

Tristan, with his blond hair and rippling muscles came charging out of the bushes. He shattered a log over one savage. The remaining two jumped on his back, but Trisan easily hurled one to the ground and rammed his back against a boulder to crush the other.

Isolde’s horse was still bucking with fright when Tristan hurried over and grabbed the reins. He didn’t whisper or click his tongue to calm it down. He simply glared into the horse’s eyes with the snarl of someone who wasn’t opposed to adding horse meat to the menu. Needless to say, the horse calmed down.