Cloud and Jessica are returning to their hometown of historic Augusta, Georgia to investigate the Slave Quarter murders. It’s a complicated reunion on so many levels as Cloud has to get used to working with his old crush and an old enemy. Detective Mark Griffin is the lead working the Slave Quarter murders. He’s also the same officer who bungled his mother’s case five years earlier, prompting Cloud to take matters in his own hands and start down a bloody path, a path that’s relentlessly ate at Cloud’s conscience ever since. 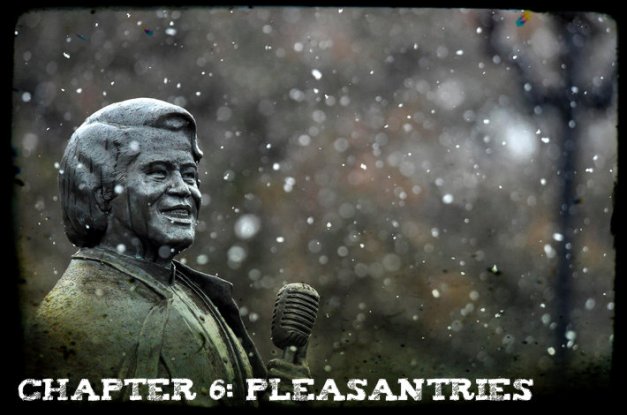 Maggie’s been whispering the same damn thing all night. I suppose she wanted to get in one last reminder just before daybreak. I’m sitting in the backseat while Jessica sits shotgun and Leanne drives like its Talladega on I-20.

It’s too early to be blasting AC/DC, but Leanne is amped up and excited. Remarkable. Her demeanor would have me believe we’re on our way to cash in free passes at an amusement park. She’s laughing at all of her own jokes, cutting off Jessica, and dominating the conversation with theories about the mainstream media being in the pockets of the Liberal politicians. Whether I agree with her or not is irrelevant. I only know that providing any feedback will only encourage her ceaseless oratory. Jessica, on the other hand, has yet to learn that critical lesson.

Leanne assumed Jessica and I were happy for our homecoming. She asks what it was like growing up in Augusta. And of course, as soon as Jessica opens up, Leanne cuts her off to talk about her own rough upbringing in New Port Richey, Florida. Yep, I get to hear replays of stories I’ve already heard as she narrates with the same spite about backstabbing boyfriends, an overbearing mother, and old co-workers who doubted she’d ever amount to anything.

In between bursts of laughter, Jessica sips from her coffee and glances back at me. She’s curious. She wonders if I’m always well groomed in my black slacks, blazer, and white collar. I’m not tired. I expect it to be a long day. There’s an energy shot in my bag just in case.

In my hands is a computer tablet. They think I’m taking the time to better acquaint myself with the case but that’s only half correct. In truth, I want to know what Det. Mark Griffin’s been up to since botching my mother’s homicide five years ago. I still remember it like it was yesterday. It was my crucible.

Back then, Det. Griffin had only recently transferred to the Athens Police Department. Taking that into consideration, I couldn’t place the blame entirely on him, not as much as I did his veteran partner. Det. John Hart was everything I hated about old school law enforcement. How they lingered to stereotypes and put everyone in a category. To Det. Hart, my mother was no exception.

Even at her funeral, I could hear Det. Hart calling my mother a whore who got what was coming to her. When they first questioned me, they made it point to bring up my family’s history with mental instability, reaching for that suicide theory, noting that no one in my family has ever lived past the age of forty-five. Then, days later, Det. Hart called himself trying to put me in my place when he told me he was closing the case and dared me to hit him. When I refrained, that fat bastard chuckled thinking he got the best of me. That was just an hour before I met Maggie.

It appears detective Hart and Griffin managed to botch another case not long after I graduated and left Athens. I scroll through the local news sites and learn that Det. Hart manufactured evidence to justify shooting an unarmed African-American. I guess he didn’t count on the rising trend of everyone taking out their camera phones. A neighbor recorded the whole thing.

Hart received a three-year sentence and was now bound to wheelchair in an assisted living facility after suffering a stroke in prison. The disgraced Det. Griffin transferred out of the precinct, somehow finding his way to Augusta of all places.

I should be satisfied but I’m not.