The Knights with No Lords: Chapter 29 – Remember Me (Fiction)

When all is said and done, Morgan le Fay has to pay for what she’s done. In just a few days’ time, there’s been a massacre, tragedy, and all-out war…all due to the treachery of a seventeen-year-old enchantress. Britannia will never be the same. Thousands will die in the battles to come and Gawain is determined to avenge them. 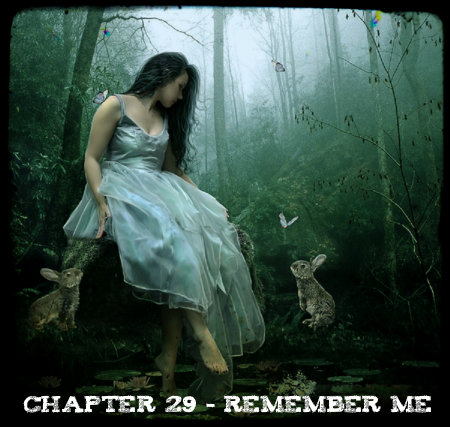 Nothing that once was could ever be the same. She knew that now. She knew there was no turning back, but at the same time, how could she move forward? Hopeless, exhausted, and alone, Morgan retreated to the one place that’s never turned its back on her. Chadwyck Forest.

The flourishing trees and all of its vivid colors was devoid of the blood, fire, and steel that so recently filled her sights. Here, she found solace with the woodland creatures, the rich smell of vegetation, and the trickle of crystal clear creeks.

She heard birds singing from the branches above. A cool breeze rustled the leaves and soothed the stinging gash along her right thigh. Morgan’s long black hair was grainy with the residue of sand and dried seawater. She had a blank stare, as if she was out of ideas and her body was now moving of its own volition.

Her black top, black pants, and hip-resting skirt were shredded and singed. She trudged into a shallow pond, an oasis in the middle of the forest where beautiful green willows bordered the banks. Once the frigid waters reached her waist, Morgan sunk her weight and let her ankles slide forward to submerge her body.

There she lay, baptized in suspended motion. The grime that encrusted her body gradually deteriorated. Her long black hair fanned out. As if the pond felt pity, it caressed her, consoled her, cleansed her, and kept her company. Thirty seconds felt like thirty minutes. When she finally opened her eyes, the clouds appeared so close. It was easy to imagine flying, gradually floating up towards the heavens.

Morgan planted her heels to stand and emerged from the pond as streams of water trickled down her smooth porcelain skin. The pain in her thigh subsided, as did the heat from physical exertion. Her heart still palpitated. And her eyes still burned from the sweat and tears but she didn’t scratch or wipe. The scene was too beautiful.

She took her time, trudging out of the pond as her hips pushed ripples with each step. Her glossy purple eyes rose up and peered through the canopy of leafy branches and the golden light that shimmered through. She found a spot by a massive oak with giant roots and a bed of soft grass.

There, she cowered down and lounged with her back against the roots. Then, tearing from the bottom of her shirt, she ripped a strip of fabric and fastened it as a bandage around her leg. She didn’t know if it would be enough to stave off infection or not. At the moment, she didn’t care.

All she could think of was the danger. The death. The look in that corpse’s eyes as she was crawling on her elbows in the midst of a full fledge battle. What happened at Tintagel was beyond her wildest imagination. Nothing went as expected. She never calculated Isolde to take matters in her hands. And she certainly didn’t think Gaheris would take it upon himself to kill Isolde.

A single tear trickled down her cheek. Her chest fluctuated as anxiety and mind-numbing fear mounted. She wasn’t naïve. She knew she deserved to be punished. She accepted it. The sooner the better…Just not from the man who was coming.

Imprisonment. Lashes. Disownment. Death. Those things, she didn’t fear. Let her die by Tristan’s hand. Let King Mark sign her death warrant. Let Gaheris put an arrow her heart. That’s fine. She could take it. Just not from Gawain!

She deflated with an emotional whimper as her face convulsed in a disgusted grimace. She buried into in her hands and cried. Oh, how she wept. Like a toddler who had all of her favorite toys taken away from her, Morgan sobbed and gushed and languished in self-loathing agony.

Then, she gasped with abject horror. The fast footsteps of a sprinter were approaching. Just as she looked over to her right, someone came bursting through the bushes with a skidding halt.

Gawain turned around and cast his sights on her. Beads of sweat covered his face. The fury in his eagle eyes blazed hot with indignation. He didn’t blink. His dark tunic was tattered and torn. His britches were soaking wet and with each step he could sense the unpleasant feeling of mud sinking beneath his boots.

Morgan said nothing but pouted in a silent plea of mercy. Meanwhile, Gawain’s eyes conveyed the sermon of a fiery priest, blaming her for the induction of sin itself. She curled against the tree roots with her legs tucked in close. Her eyes dropped from his face to his right hand. Gawain was clutching his katana, the razor sharp blade still filthy with the blood of so many. Morgan stared at the sword, fixated on it as a child to a father’s rod. She was triggered to vomit but pushed the lump back down her throat. After sitting there for some time, she finally propped up and sat on her knees with a studious arch in her back.

“Are you going to kill me?” she asked.

Gawain squinted. It brought him no pleasure to see Morgan so afraid but he demanded justice.

“Just give me a reason…”

“Because I love you!” Morgan whimpered.

“YOU CALL THIS LOVE!?” Gawain screamed with tears of his own.

“Damn it, Morgana! We’re not children anymore! These are peoples’ lives you’re toying with! Look at what you’ve done! I could’ve died! My brothers could’ve been killer. For the love of God! I almost lost you! You… I almost. I almost lost …Why? Why can’t I…DAMN IT!”

Gawain flung his sword into the pond and began swinging his fists as if he was literarily battling his own demons. Morgan kept her head bowed and winced with each forceful swing Gawain threw. Finally, Gawain dropped to his knees and let out a deafening roar that sent ripples across the pond.

A gust of wind howled through the trees.

“Just tell me this,” Gawain said. “Is it true? Did you poison Tristan’s mind to make him fall in love with Isolde? The truth!”