The Knights with No Lords: Chapter 22 – Weighed Down (Fantasy Fiction)

Gawain finds the fugitives Tristan and Isolde holed up in a cave by the sea. With a dagger to his throat, Gawain does his best to convince the star-crossed lovers to turn themselves in. 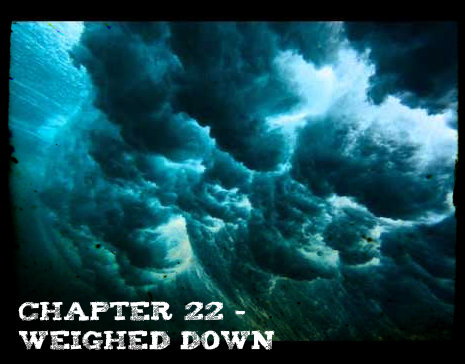 White lightning stretched like veins across the night as a single rider stormed over the hills. His cape rustled violently in the wind. He coiled the reins and held on tight as the hooves of his warhorse pounded the earth.

The darkness, he did not fear. Being thrown from his horse, he did not fear. Even when he was skirting the edge of a bluff with a fifty-foot drop, Gawain was not afraid. He throttled his horse and spurred harder, faster. Time was of the essence, but more than that, the danger, the adrenaline coursing through his body was like morphine to the anxiety of self-loathing sorrow.

After riding for nearly two hours, Gawain arrived at the southern coast. St. Michael’s Mount appeared as a black iceberg floating five hundred yards off shore. It was an island with an abbey erected on top. As Gawain stood on the rocky shoreline with waves crashing beneath his feet, he could see signs of life, candles flickering from the windows.

However, Gawain did not come to see the abbey. Even if the nuns accepted Isolde into their convent, it seemed unlikely that Tristan would go through all that trouble just to give her away and leave.

A breeze blew through his long curly locks. Demons seemed to be laughing from the clouds with each flash of light. As if the storm was daring Gawain to plunge into the unforgiving waves.

Gawain turned his attention to the vertical landmass to his right. It was a sea cliff with jagged edges and jarring protrusions, dotted with dozens of caves. Some say these were the caves of harpies, the same ones from Homer’s Odyssey. As the trade winds swept through the channel and scraped against the massive wall, an eerie howl whirled about like wailing banshees begging for a swift and merciful end. At present, the caves appeared dark, hollow, and vacant.

Gawain removed his cape and strapped it to the horse. He considered removing his chain mail and breastplate but elected to keep them on. It was nearly pitch black. The lightning provided brief flashes of his surroundings, flashes he had to commit to memory.

Stepping into the sinking sand with the edge of the tide grazing over his boots, Gawain skirted the shoreline as he approached the sea cliff. Once the water was up to his knees, it was time to climb.

Exploding waves drenched Gawain from head to toe. He’d cringe and turn his face away from the spray. Then he’d continue on, sliding his fingers into the cracks with his toes and insoles carrying the grunt of his weight.

Gaheris’s words persisted like a sore throat. Gawain’s forearms were burning and his metal breastplate made it difficult to hug the wall the way he wanted. He inspected three hollow caves and found nothing. There had to be at least two dozen more. To check them all, given his increasing fatigue, “insanity” seemed about right.

An hour had passed. Sweat and saltwater made his eyes sting. He could barely see. That was, until he looked down. At that exact moment, lightning flash and showed him a nightmare from which he truly wished he could wake. The dark ocean looked like boiling oil beneath his feet. Loud blasts of thunder resonated in his chest and in the split second of sheer fright, Gawain lost his grip. His mind went blank. The cliff wall was right in front of him, and suddenly so far away.

It happened so quickly. He didn’t realize he was falling until his back hit the water with a table-breaking crash. The cold sea had swallowed him whole.

Gawain stared in a half sedated state, submerged in place as if the ocean was still deciding what to do with him. The sky had other plans. It struck the sea with a powerful bolt of lightning. The electric current hit Gawain, accelerating his heart. Now fully alert, he gasped and sucked in more water, choking as he clutched his throat and cringed at the burning sensation filling his lungs. He tried to swim up towards the blurred flashes of light. But no matter how much he tried, he kept sinking. The armor was weighing him down. Seemed pointless. Easier just to let go and die.

As Gawain closed his eyes and felt but a taste of not having to worry about anything else ever again, he was grabbed by his breastplate and yanked up with an incredible force. Gawain emerged from the salty sea and was dragged up the cliff wall, wheezing and coughing up all sorts of fluids, desperate to fill his lungs with air. Tristan was holding him with one hand, and scaling the stone wall with the other.

Upon reaching a cave twenty meters up, Tristan slung Gawain in like a ragdoll, causing him to roll and hit his head on a rock.

A flash of light revealed a wide-eyed Isolde hovering over Gawain with a dagger aimed for his heart. Gawain was scared stiff. It was if Isolde didn’t even recognize him. The absence of emotion or compassion, the cold stillness in the way she brandished her blade. Gawain didn’t move a muscle. The last thing he wanted was for the viper to strike.