Det. Griffin has gone mad. He’s just been through a traumatizing ordeal. Cloud explains why he was punished and in the midst of his self-righteous condemnation, Cloud discovers sins of his own. 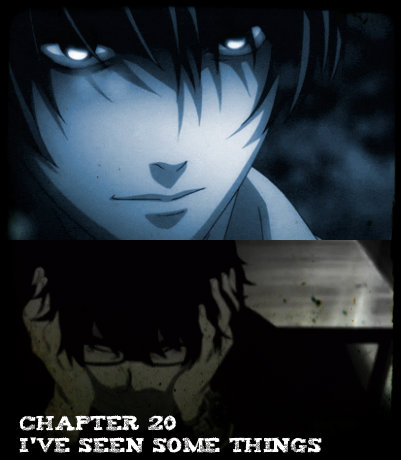 The next morning, Jessica, Leanne, and I arrive at the precinct promptly at nine. There was a vast difference on Moor Street between today and yesterday. No crowds. No screaming faces. Just littered trash.

The ladies pick up the pace as we step off the elevators. I end up falling behind with my hands in my pockets. There’s a square patch beneath my left eye to reduce the swelling. I’m pristine in my black suit and tie. One could safely assume I just came back from serving as a pallbearer. It wouldn’t be too far off from the truth.

It’s touching to see them all so concerned about Griffin’s well being. I understand why and I don’t blame them…but still…if only they knew what I knew I wonder if they’d be so quick to lend a helping hand. Yeah, probably. Perhaps that’s why the guilt’s beginning to gnaw at my conscience. In any case, it’s too late now. The damage is done.

On the 3rd floor, deputies and detectives are huddle around the desk closest to Griffin’s office. Agent Dixon sees Jessica and Leanne coming. He receives them with open arms. Leanne fires off question after question by which Dixon simply proceeds to nod. Jessica covers her mouth in shock. Everyone hears the click of a door handle and a round of shushing quells the conversations.

It’s Samantha Griffin…the wife. She leaves her husband’s office as two suits from Internal Affairs enter in her stead, closing the door behind them. I recognize Samantha from the photo on Griffin’s desk. That sandy blonde hair and the soft freckles bridging her nose, its Sam alright. She has the toned body of an avid tennis player, active and fit. She’s about my age, a couple of years younger than Griffin, but her tan complexion is now pale with grief.

Jessica and Leanne exchange awkward glances before approaching to introduce themselves. As soon as they reveal their involvement with the case, a despondent Sam breaks down in a gripping scene of tears, collapsing into Leanne’s arms. It’s as if she just learned her son was killed in combat. Leanne doesn’t know how to react. She keeps gawking up at Jessica but even Jessica’s at a loss of words.

Instinctively, Leanne lowers Samantha to the carpet and settles her against the side of a desk. There, she and Jessica console the wife with false promises about Griffin’s recovery. It’s all so melodramatic. I should be more sympathetic but I’m not.

“I saw the tape,” a country voice crawls over my shoulders.

Agent Dixon continues with, “It doesn’t make the darnest bit of sense. The boy just stands there while the sum’ a bitch walks up and splits his head open like a jack-o-lantern. Never seen anything like it. Beginning to think this place really is haunted. That’s what the papers is callin it after the last suicide. But what’s stickin in my craw is that the suspect seemed to have no concept of pain whatsoever. Just kept pounding away. Not even when his eyes popped out and his lips smashed in like a banana.”

As discreet as I assume he’s trying to be, Jessica and Leanne overhear. Jessica in particular looks up with a fiery glare. It’s no longer that she doesn’t believe it, but more so she smells foul play. Two suicides in the span of five days is a coincidence Jessica’s not willing ignore. She abruptly stands and straightens out her pantsuit, holding back her ire with a clenched jaw and slow steady breaths.

“I’m gonna need to see that video,” she politely demands.

Dixon extended his hand to direct them toward the conference room in the corner of the bullpen. He informs them, “It should still be queued up. The D.A.’s in there right now so tread lightly.”

Jessica doesn’t wait for Leanne to get up. She promptly marches into the conference room and takes over. No one rebukes her when she takes command of a laptop and starts the video from the beginning. Leanne enters the room choking on her own tears. Dixon helps Sam off the floor and escorts her to get her some coffee.

All the while, I say absolutely nothing with my hands in my pockets. I only observe as if I’m sitting inside the theater of my own head with eyes as my own personal big screens to the real world. And of course, as per usual, I’m conflicted by what I see. It’s all so morbid, so morose, the complete opposite of last night’s triumph. There’s so much pain and suffering in plain view. All of it’s my fault and the only one I want to apologize to is the wife. But I can’t. I won’t.