With their main suspect in custody, the entire department’s on pins and needles as Jessica and Det. Griffin grill him about the Slave Quarter Murders. Cloud, in particular, has his stomach in knots as he still thinks they have the wrong man. And as per his rotten luck, bad turns to worse when the suspect shoots his way out of the precinct. This is how the innocent dig their own graves. Because they’re idiots. 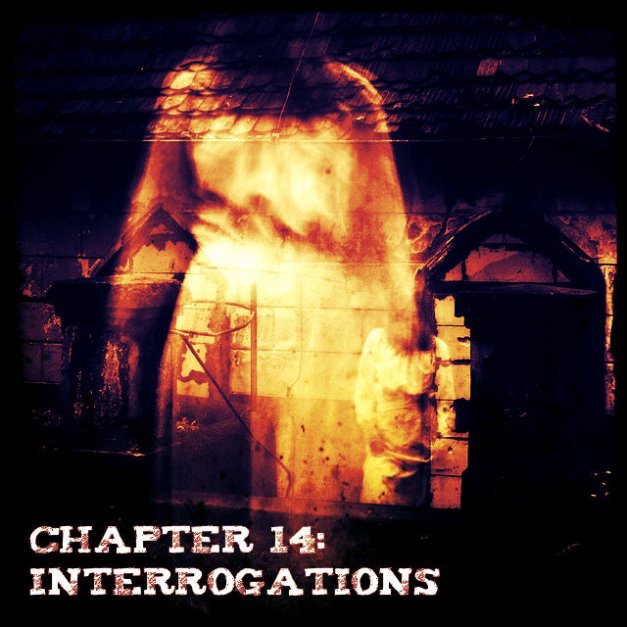 Knowing that Jamar and O’Shea are locked up in a holding cell does very little to assuage my angst. And oh look! Here comes Jessica and Leanne. It’s five past nine so I guess I should’ve expected them. But still, I could’ve used another five minutes to come up with more plausible lies.

Again, I’m sitting at the vacant desk, this time with an ice pack to my face. My blazer is sprinkled with spots from being laid out in the middle of the road. O’Shea’s punch was strong, but he lacked power. He more so pushed me down, than hit me. If not for my previous injuries I could’ve taken it like a boss instead of getting carried off like a…

“Cloud! Oh my god! What were you thinking?” Leanne gawks.

The ladies lean in to examine the swelling. They’re upset, understandably so. I don’t know what they heard, so I’m not sure what exactly to apologize for. Jessica appears well rested while Leanne looks a couple years younger, more vibrant with color in her cheeks.

“Did you really go to the slave quarters by yourself? In the middle of the night?” Jessica asks.

I nod and for some reason smirk at the same time.

“You’re an idiot! You know that? I read the report. Someone threw you out of freaking window? You could have been killed!” Leanne snaps.

“This is serious, Cloud,” Jessica tells me.

I’m just about to speak up but I see Griffin and Agent Dixon approaching.

“Don’t give him too much grief.” Griffin says in good cheer. “At least that gives us two alibis Jacory, aka J-Pooy now has to account for.”

“Nothin. But, hey! Thanks again for saving my ass back there. I appreciate it.”

“You got it, Cloud! You and I are like Shaq and Kobe. We got each others back!”

“Yeah, well Chomsky’s gonna throw a natural fit when he finds out about this. Honestly, what were you thinking? No back up!? No service weapon!? Freaking idiot!” Leanne says as she continues to lay in.

Agent Dixon gives me a suspicious look as if he could tell I’m holding something back. I resolve to say nothing in my defense. Whatever they’re thinking, it’s best to just let them run with it. I rather do that than mention something that could come back to bite me in the ass.

“It’s insane out there.” Jessica frets. “I think it’s going to get worse. Jacory just came in with his father and their attorney. They’re meeting with one of the captains.”

“Good! Just put me in a room with him and I’ll wrap this up,” says a determined Griffin before he strolls off toward the elevator lobby.

Dixon goes with him. I try to follow but Jessica yanks on my arm, sending a scorching pain down the left side of my body. She looks me square in the eye, casting a spell by which I’m left speechless under her control.

“Talk to me. What’s going on?” she whispers.

God…how can I deny those brown eyes? I look at Leanne. She too, is waiting.

“Leanne, was Griffin with you all night?” I ask as politely as I could.

Just like that, Leanne gushes with a haughty smile. It’s like she can’t wait to spill the beans, but of course, she wants me to work for it. “Cloud! That’s none of your business. Geez!”

“Talk to us! What’s going on?” Jessica urges.

“You guys…” I begin with a heavy sigh. “I don’t think Jacory is the man we’re looking for.”

Leanne claps. “I fucking knew it! I knew you were going to say that. Why? ‘Cause you didn’t figure it out first?”

My lips tighten. Why did I even bother?

Jessica adds, “Cloud, we got this guy on camera a few miles from where KeNedra was picked up by paramedics. He can’t account for the time of the abduction and he has a history of sexual abuse. Also, forensics found blood and dirt in his truck. They haven’t connected it to the victims yet but it’s only a matter of time. We’re just waiting on DNA results. So tell us, why don’t you think he’s our guy?”

Jessica…she’s not raising her voice or frowning, but I can tell she’s just as insulted as Leanne. Just then, the doors to the bullpen open up with a loud wooden creak. The clamor of conversations blare in. A stern Dixon and Griffin are leading an entourage of grim faces, all of them ready to stand trial.

The short, bald, and stocky Jacory “J-Poopy” Godchaux isn’t wearing handcuffs. He’s dressed in a respectable neutral tone suit behind his flashier father. The popular emcee preacher, Tavvy Godchaux is dressed in a loud purple three-piece suit with matching gator skin boots. Next to him is their estimable defense attorney/civil rights activist, Malachi Sanders Esq. Malachi is dark, lean, and deceptively young with a clean shave and thick-framed glasses. His tall frame and long dreadlocks make him standout, even amongst the grape looking Tavvy.

I’m sizing Jacory up. He lacks confidence, as if he’s already been sentenced to death.

“You want to know why I think he’s not our guy?” I tell the ladies. “Because there’s no way he could’ve taken me in a fight.”