Knights with No Lords: Chapter 1 – The Vision (Fantasy Teen Fiction)

Morgan le Fay has a vision. In the middle of a storm, she sees Gawain shackled and bound aboard a slave ship. At last, he’s coming back to Britannia. It’s been four years since she lost him and now she wants him back. But what can a teenage brat known for her mischief do? Who will believe her after all the craps she’s pulled in the past? 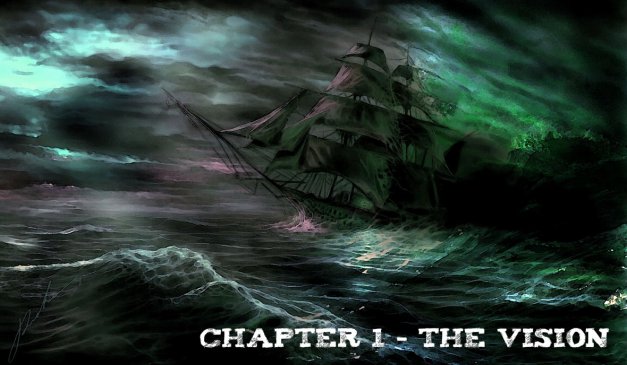 Chapter 1 – The Vision
By Rock Kitaro

“It feels like I’m sinking. There’s a swarm of bees in my stomach. The trickle in my ear is nauseating and for some reason these stupid flashes of light blur the lines every time I come close to making something out. Honestly… It’s all beginning to get very aggravating.”

A tempest unleashed hell over the vast turbulent seas. It should have been pitch black, but blinding cracks of lightning stretched as veins for miles. Gale force winds howled like demented ghosts over the abyss. Stone-black waves with white crests moved like snowcapped mountains swaying in restless aim. Torrential rains made visibility poor and the dark clouds appeared to be getting closer and closer as if to smother the earth in her sleep.

It was madness to be caught in such hazard, and yet, there! Cruising down the valley of two massive waves was a single frigate carrying the fate of over seventy souls.

A brave crew of twelve wrestled with the riggings. A bearded captain and his second-mate manned the rudder from the wheel deck. They were approaching the Isle of Man, a massive iceberg of an island responsible for more shipwrecks than serpents or sorcery. Navigating through the veils of heavy rain in the middle of the night should have been next to impossible. Yet, there they were.

Prayers whispered below deck as teeth rattled and toes curled. Deafening blasts of thunder kept everyone wide awake. No one wanted to be asleep should the ship capsize or ram against any number of protruding rocks that breached the surface like siege defenses. Falling overboard or being swept out to sea spelled instant death. It didn’t matter if they held hands or clung to floating chunks of wood. In this deluge, drowning was inevitable.

There was royalty on board, a princess accompanied by three of her maidens. Oddly enough, while the maidens trembled with trepidation, the princess remained poised with a hardened sense of determination. She wasn’t about to let herself drown. Even if the ship did sink, there wasn’t a single doubt in her mind that she’d find some way to survive. It’d make for a good story and maybe even convince her people that she was more than just some dainty little girl.

Out in the main hold, disgruntled soldiers with broad shoulders and thick beards sat with their backs against the wall. They spat and grumbled all sorts of blasphemies, begging for the worst to be over. Cold water leaked through the cracks, extinguishing all hopes of lighting fires. It was so dark that they could barely see the hands before their eyes. Tormented horses neighed as they struggled to break free. Someone needed to calm them down but no one was willing to risk getting crushed.

And there, past the horses, past the sacks of grain, and gold, and shields, and armor…was a single slave, shackled and chained upside down to the ceiling as if he posed a formidable threat to his masters. Every time the ship jerked, his shoulders would bang against the wooden hull, causing him to wince with intense pain but he never screamed. Nor did he cry out for mercy or ask for help. He was so young, but strong and full of pride that he kept buried deep down inside.

This young slave was dressed like a soldier but marked by a patch of mustard brushed across the chest of his tunic. After slamming against the hull once more, the slave finally opened his eyes. His long hair was brown and curly like that of a Saxon. His skin was olive as if he hailed from the Italian peninsula but those eyes… In his eyes she saw a myriad of herbal hues, mostly jade with a burst of auburn.

Water dripped to his face but the young man didn’t blink. He peered through the cracks, slowly hypnotized by rolling clouds that made it seem as if the ship was already submerged. Lightning struck. He saw it and immediately felt the boom of thunder rattling his core, detonating a migraine he tried so desperately to shake.

It was then that hopelessness crept in. Whatever dignity or confidence once engrained in this young man had deteriorated to the point that he could only think of one thing, one person, a single source of bliss that carried him far away from the pain and sadness. As his jaw slacked and the cool air tickled his parched throat, the young man whispered.