A former U.S. commando turned Syndicate enforcer recounts his first and only mission with the infamous Black Creek Security firm. It’s on this mission that he has the honor to witness the Godfather’s favorite nephew in action. 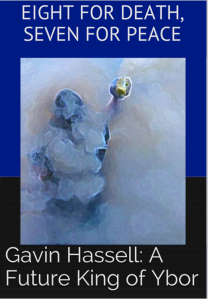 When a young street tough stabs a nonviolent door-to-door preacher, a small town urban neighborhood becomes infected by several of the most notorious criminals in the world. Continuing with the “Tales of Ybor” stories, this title contains graphic violence and street level language. While “The Godfather’s Sword” revolves around Braden Pierce, the prodigy syndicate enforcer, “Seven Deaths” introduces us to one of the few individuals who can match him in skill and execution. Gavin Hassell is an indiscriminate mercenary who sets his own agenda based on the highest bidder and his own private personal constitution.